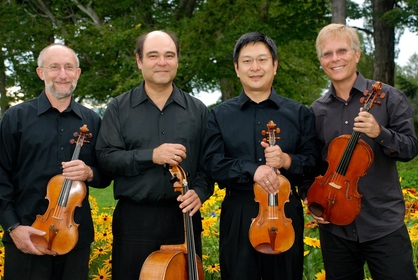 Taking its name from New England novelist Nathaniel Hawthorne, the Hawthorne String Quartet includes Boston Symphony Orchestra violinists Ronan Lefkowitz and Si-Jing Huang, violist Mark Ludwig, and cellist Sato Knudsen. Since its inception in 1986 the Quartet has performed throughout Europe, South America, Japan, and the US, including major festivals such as Tanglewood, Ravinia, Aspen, and Prague Spring. The Quartet has an expansive repertoire ranging from the classics of the eighteenth and nineteenth centuries to contemporary works. It has distinguished itself internationally by championing the works of composers persecuted during the Nazi regime, especially composers incarcerated in Terezín.

The Quartet's CD "Chamber Music from Theresienstadt" received international critical acclaim and won the Preis der Schallplattenkritik in 1991. Their "Silenced Voices" CD on Northeastern Records premiered newly recovered music by composers persecuted during World War II. The Quartet made the first recording of the string quartets by Pavel Haas and Hans Krasa; this recording was included in London Decca's Entartete Musik Project and was awarded Belgium's Cecilia Grand Prix Special Du Jury, presented in recognition of "an exceptional undertaking and paying homage to an interpreter who has made a mark on the history of recorded sound." Their next recording on the London Decca label was Erwin Schulhoff's Concerto for Solo String Quartet and Chamber Orchestra; the quartet gave the American premiere of this work with Seiji Ozawa and the Boston Symphony Orchestra and the German premiere with Deutsch Kammerphilharmonie.  The Quartet has performed on radio and television worldwide and was appointed Quartet-in-Residence at Boston College in 1998. They regularly conduct master classes and residency programs in the US and Prague.