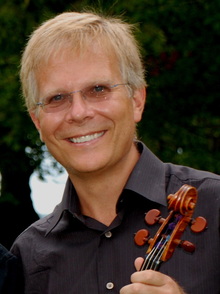 Mark Ludwig, Executive Director and Founder of Terezín Music Foundation, is a Boston Symphony Orchestra member emeritus who blends his musical career with social causes promoting tolerance. He has performed on numerous CDs and in concerts to benefit causes in the US, Bosnia, Dafur, Tibet, and Europe. In 2009 he performed for the Dalai Lama at the United States Capitol in a ceremony awarding His Holiness the Tom Lantos Human Rights Prize. For his global outreach efforts, Mr. Ludwig was nominated to be a UNESCO Artist-for-PEACE and Goodwill Ambassador.

Mr. Ludwig founded the Terezín Music Foundation in 1991. A Fulbright scholar of the Terezín composers, he has authored essays, program notes, and a Holocaust curriculum for schools. Harvard University, the University of Virginia, and Charles University in Prague are among the many schools where Mr. Ludwig has appeared as guest lecturer. Since 2001 he has been Adjunct Professor at Boston College, teaching the course “Art and Music During the Holocaust and Third Reich."

In addition to serving on the Terezín Memorial Museum Advisory Board, Mr. Ludwig has consulted for numerous international cultural organizations and symphony orchestras, including the Chicago, Boston, Birmingham (UK) and Philadelphia Orchestras. He has participated as artist, consultant, and producer in CD recordings produced by London DECCA and TMF. NPR, BBC World Radio, and ABC World News have showcased the work of Mr. Ludwig and TMF.