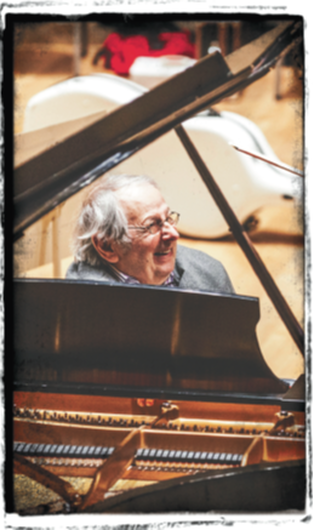 You're listening to the eloquent  "Slow and Lonely" movement from André Previn's first TMF commission, his Quintet for Clarinet and String Quartet. It is one of our most beloved commissions, and working with Maestro Previn was a treasured experience. We are deeply saddened to learn of his passing on February 28, 2019. This Quintet was recorded live at Boston's Symphony Hall and appears on the TMF CD "Previn Plays Previn" along with Previn's Sonata for Clarinet and piano, recorded live at its world premiere at the Prague Spring Festival. ​The Sonata is performed by Maestro Previn himself and Thomas Martin; Previn composed it especially for Mr. Martin, whose tribute feels especially poignant today:

BSO CLARINETIST THOMAS MARTIN: "Something Far Beyond a Dream!"

"I’ve admired André Previn as a musician, conductor, and composer all my musical life. In recent years I’ve had the opportunity to get to know André personally, and I admire him also as a person of upmost integrity, intelligence, and wit. I was eleven years old when a friend of mine introduced me to an LP of him performing a composition of his with clarinetist Benny Goodman. I was immediately smitten. In the 1970s I was glued to a television set for every episode of 'Previn and the Pittsburgh.'  The first time I worked with André was my very first year as a member of the Boston Symphony Orchestra. It was August of 1985 at the Tanglewood Music Festival. I remember him walking on stage and feeling a dream had come true.

During a 2002 BSO rehearsal of his Violin Concerto with Anne-Sophie Mutter as soloist and André conducting, I thought, 'this is a violin concerto but the clarinet writing is absolutely superb. André Previn has to write a piece for the clarinet!'  It took me several years to gather the courage to ask him, but when I did, he couldn’t have been more gracious!  Having the opportunity to perform a clarinet sonata written for me by André Previn with André himself at the piano? Now that is something far beyond a dream! Add to that, André composing a quintet for clarinet and strings?  How far over the moon are we now???"